Rock salt, Zechstein salt, salt from the Röt Formation or from the Muschelkalk (shell-bearing limestone), and Jurassic salt: there is a vast range of salt deposits that differ distinctly from one another as regards their age and geology. Sodium chloride – the chemical name for salt – consists of the metallic element sodium and the gaseous element chlorine. 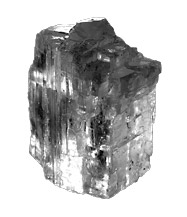 The phrase “salt of the earth” is used with symbolic meaning in the bible, but it also reminds us that salt is closely linked to the earth and its history. Halite (as rock salt is known) is derived from the Greek words “hals” for salt and “lithos” for stone.
Rock salt is one of the softest minerals, with a hardness value of 2 (the value for diamonds is 10). The basic form of salt is a perfect cube (a hexahedron or a body with six surfaces). A crystal of common salt consists of a “cubic face-centered” crystal lattice of sodium and chlorine ions. In this configuration, one sodium (Na) ion is symmetrically surrounded by six chlorine (Cl) ions, and each Cl ion is surrounded by six Na ions.
Halite crystallizes strictly in accordance with the rules of the cubic crystal system. This has been proven by laboratory experiments under a variety of different solution conditions. There are no exceptions to the rule for any of the crystallized forms – octahedron (with eight surfaces), rhombic dodecahedron (with twelve surfaces), whisker (needle-shaped) or dendrite (scale).
Halite or rock salt is classified as one of the evaporite rocks (minerals formed through evaporation), created by precipitation when the water in a salt lake or lagoon dries up. As well as salt, other minerals are left behind, such as sylvite (potassium chloride, KCl), gypsum (calcium sulphate, CaSO4, 2H2O), lime (calcium carbonate, CaCO3), dolomite (calcium/magnesium carbonate, CaMg(CO3)2) and anhydrite (gypsum with no water content). The precipitation process always follows the same rules. The influx of new water disrupts the process and the minerals can either dissolve again or be covered by new layers (cf. the bar theory).

Zechstein salt
The most substantial and widespread rock salt deposit in Central Europe originates from the Zechstein era, with numerous salt cycles that were created as the sea advanced and retreated. The thickness of the cycle layers varies from 100 to 600 metres. Four to six cycles of Zechstein salt contain potassium (potash) salts. Zechstein salt was partially covered over by younger rock layers that are over 2,000 metres thick. The pressure exerted by these layers caused the salt to flow and rise upwards towards the earth’s surface. Huge salt domes (diapirs) were formed. These diapirs are used to extract rock salt and potassium salt, to collect oil and natural gas, and for the final storage of waste.
Geological designation: Zechstein
Approx. no. of million years ago: 250
Distribution: England, North German lowlands

Upper Permian/Werfenian salt
Includes the salt deposits in the Eastern Alps, especially in the region of Hall im Tirol, Berchtesgaden, Bad Ischel, Hallstatt and Altaussee. They were only shifted from the south, away from the area where they were deposited in the Tethys, during the formation of the Alpine mountain range. These salt deposits are not layered, but are folded and accreted with other rocks (as denoted by the term “Haselgebirge Formation”); they are therefore heavily interspersed with clay, anhydrite and dolomite (low salt content).
Geological designation: Upper Permian
Approx. no. of million years ago: 245
Distribution: Austria and Bavaria (from Hallein to Altaussee)

Röt salt
This salt, in layers of between 60 and 80 metres, is mainly known from oil drilling operations. It is extracted by leaching at a location in Hengelo (Netherlands), from a depth of 300 to 400 metres.
Geological designation: Röt (red or Bunter sandstone)
Approx. no. of million years ago: 240
Distribution: North Germany, Netherlands

Muschelkalk (shell-bearing limestone) salt
This salt was created 235 million years ago as the sea advanced from what is now the area of the North Sea, and it extends into Switzerland and Eastern France. The layers attain a maximum thickness of 100 metres. This salt aroused interest at an early stage because it feeds numerous inland salt springs, making it possible to extract salt. More modern extraction methods have added to the importance of Muschelkalk salt. It does not contain any potassium salts and is frequently interspersed with anhydrite, clay and dolomite.
The Swiss Saltworks at Schweizerhalle and Riburg obtain their salt by leaching from this Muschelkalk rock salt. Other important extraction locations include Heilbronn and Stetten in Germany, and Varangeville, Tavaux and Dombasle in Lorraine. The salt is extracted as rock salt with the help of mining techniques, but is then stored as evaporated salt. See the illustration: “Salt in Switzerland”.
Geological designation: Middle Muschelkalk
Approx. no. of million years ago: 235
Distribution: Lorraine, Switzerland and French Jura, South Germany
Muschelkalk and Zechstein salts release chloride ions into the deep rockwater in a natural process that forms mineralised waters.

Keuper salt
In the Keuper (Upper Triassic), evaporite rock (mainly gypsum and anhydrite) was again precipitated in Central Europe 225 million years ago. Regional saliniferous basins are located in this rock, for example in Cheshire (UK), Nancy (France) and in Lons-le-Saunier (Jura). They are less than 100 metres thick and their quality is modest.
The isolated salt deposit at Bex (in the canton of Vaud) in the Rhone valley is also Keuper salt, but it originates from the southern section of today’s Alps. Like Haselgebirge, this is a breccia (or mix of rocks) which is interspersed with salt. The salt content is low.
Geological designation: Gypsum Keuper
Approx. no. of million years ago: 225
Distribution: England, Lorraine, Switzerland and French Jura

Jura (Jurassic) salts
Precipitations of salt also occurred in Central Europe during the Jurassic era, about 150 million years ago. No use of these salt deposits is known.
Geological designation: Upper Jurassic
Approx. no. of million years ago: 150
Distribution: North Germany

Tertiary salts
In the Cretaceous period (145 to 65 million years ago), saliniferous formations remained limited to the Mediterranean region. It was only in the Lower Tertiary that salt deposits were formed north of the Alps again, 40 million years ago. These include the deposits of rock salt and potash salt in the Rhine Rift Valley between the Black Forest and the Vosges (Eocene/Oligocene), the substantial Bresse salt deposit (gas storage) and the deposits that have been exploited since the Middle Ages along the Carpathian Foredeep Basin in Wieliczka and Bochnia (both in Poland).
Geological designation: Tertiary
Approx. no. of million years ago: 40
Distribution: Rhine Rift Valley, Carpathians
Very many major salt deposits in the Mediterranean region originate from the Tertiary period, such as those in Romania, Sicily, Italy, southern France and Spain.

Salt, common salt, sodium chloride (NaCl)
In its broader sense, “salt” also denotes substances that are created in a reaction between an acid and a base. Characteristic features of salts are:

Common salt, sodium chloride
Salt, consisting of the metallic element sodium and the gaseous element chlorine, is a white solid which dissolves in hot and cold water. Common salt does not dissolve easily in alcohol and it is insoluble in concentrated hydrochloric acid. Common salt is widespread in nature. Vast quantities of it are present in the sea, which contains an average of about 35 grammes per litre of water. Many rivers, lakes and inland seas also contain common salt.
The rock salt deposits formed throughout the earth’s history, which have been known for about 600 million years, are inexhaustible.

Sodium
Symbol Na; a highly reactive, silver-white soft metallic element with atomic number 11. It belongs to the first main group of the periodic system and is therefore one of the alkaline metals. The metal was discovered in 1807 by the British chemist Sir Humphry Davy. Elemental sodium is so soft that it can be cut with a knife. When exposed to air, it turns matt grey within a few seconds (due to a layer of sodium hydroxide). Sodium enters into a violent chemical reaction with water, releasing sodium hydroxide and hydrogen. There is a risk of explosion when it reacts with halogens or chlorinated hydrocarbons. In the order of frequency of elements occurring in the earth’s crust, sodium is in seventh position. About 2.5% of the uppermost layer of the earth’s crust consists of chemically bonded sodium. Another characteristic of this element is that it is an essential component of living organisms. For instance, sodium plays a key part in transmitting stimuli along the neural pathways.

Chlorine
Symbol Cl; a yellowish-green gas. Together with fluorine, bromine, iodine and astatine, it belongs to the halogen group. Elemental chlorine was isolated for the first time in 1774 by the Swedish chemist Carl Wilhelm Scheele. Chlorine is gaseous at room temperature, but it can easily be liquefied by increasing the pressure. The gas has a pungent odour and is very poisonous in higher concentrations. Chlorine does not occur in nature it its elemental form. Its compounds are mineral substances (mostly chlorides) which are frequently encountered. It is in 20th position in the frequency ranking for elements found in the earth’s crust. Chlorine reacts easily with many substances such as water, organic compounds and numerous metals.
The main technical methods of obtaining chlorine involve the electrolysis of aqueous salt solutions (sodium chloride and also potassium chloride). Alkaline lye is obtained as a by-product of this process (chlorine-alkaline electrolysis).

A “pinch” of theory and practice

Practical importance:
When seawater evaporates in lagoons and saltmarshes, the common salt only crystallises when the saturation limit has been reached; conversely, it dissolves well again when there is an inflow of water or rain.

In order to crystallise salt from salt water (brine), the brine should be saturated; otherwise, too much energy is used to evaporate the excess water. If the brine is saturated, the salt crystallises immediately. The concentration of salt in water with a low salt content used to be increased with the help of the wind in “graduation works”, as they were known, and only then was it fed into the evaporation pans.

Experiment:
“Refrigeration with a mixture of ice and common salt”

Practical importance:
De-icing salt is used to ensure the safety of traffic every winter. Ice, packed snow and black ice at temperatures of about -8 ºC can be counteracted effectively with salt.

Practical importance:
Salt is naturally present in water, so it also determines the quality and taste of the water (fresh or salt water) and may even make it suitable for medical use (mineral waters).

Each of us has a different sense of whether the soup is salty enough. Isotonic common salt solution, which is usually perceived as quite salty, can save lives when used as an infusion solution, or can quench a strong thirst if drunk as a beverage.