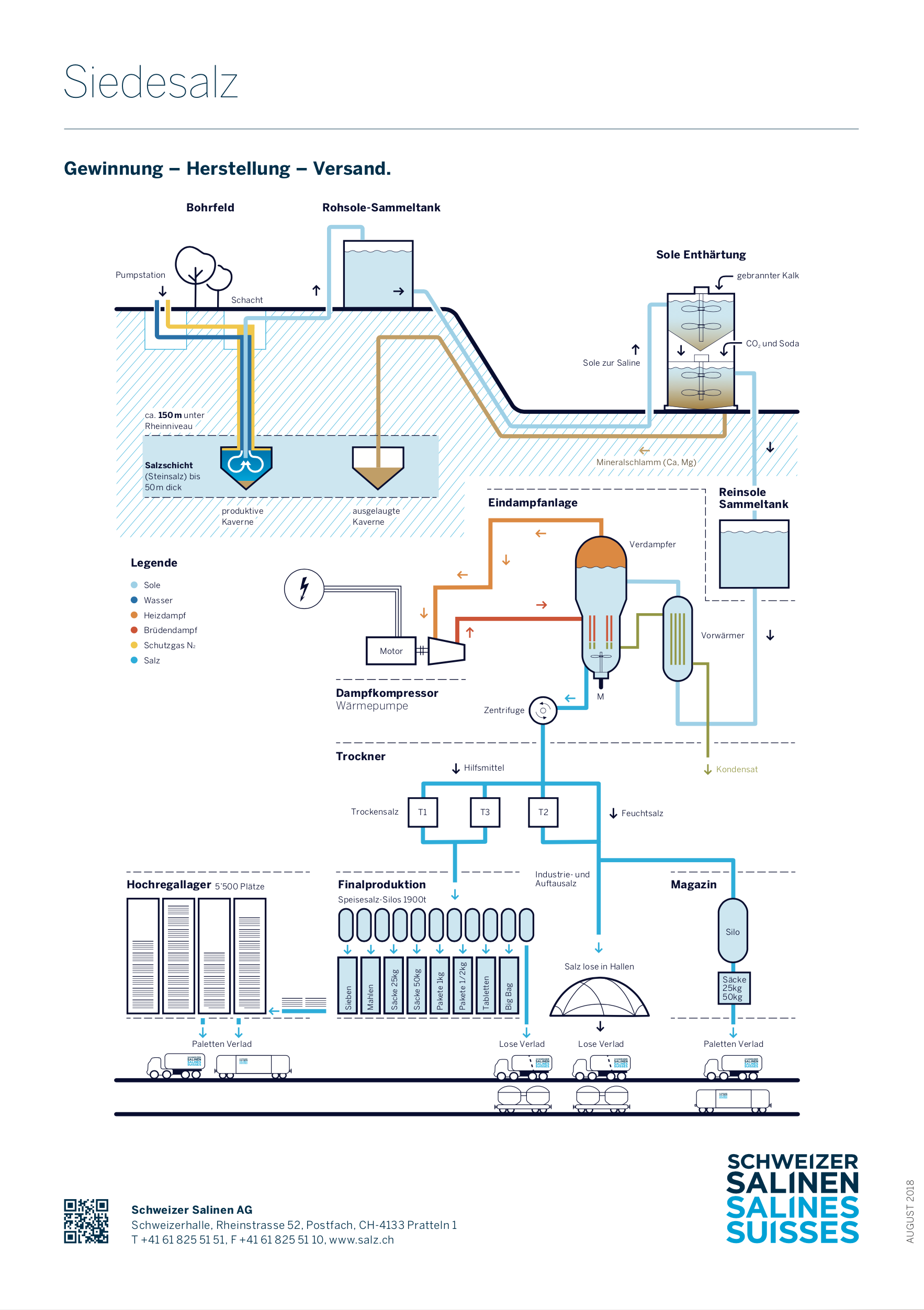 The salt is extracted from the rock salt layer at depths of as much as 400 metres. Read on to learn more about how salt is extracted, produced and processed.
At its Schweizerhalle, Riburg and Bex sites, Swiss Saltworks leaches salt out of the rock salt layers at depths of as much as 400 metres, by feeding in water. The concentrated salt solution flows through pipelines to the drilling field collection tank, from where it is transported to the saltworks for softening and to undergo the crystallisation process in the evaporator plant. The salt solution (brine) used to be “boiled up” in large pans. The common salt obtained in this way was therefore known as “cooked” or “evaporated” salt. These traditional terms have remained in use (in German) through to modern times. 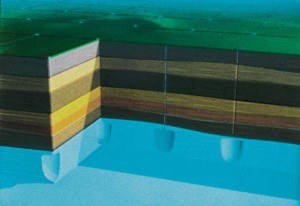 The exploratory boreholes are extended and fitted with pipes in order to leach and extract the brine, i.e. three concentric pipes are lowered into the holes and fixed.
The innermost pipe carries the saturated brine upwards, the second carries an infeed of fresh water from above, and the outermost pipe carries nitrogen, which is used as a protective gas to prevent rapid leaching between the suprajacent salt and the inflow of fresh water. A network of underground brine, water and protective gas pipes stretches for several kilometres below the drilling fields, traversing height differences of up to 400 metres; the pipes meet up in underground pumping stations. The brine flows into the drilling field collection tank where it is visible for the first time as a liquid that is already as clear as water.

The unprocessed brine from the drilling fields flows into the saltworks’ collection tank, from where it is pumped into the reactor tanks of the brine softening plant.
As well as 310 g of pure common salt, each litre of saturated unprocessed brine also contains 6–8 g of dissolved calcium and magnesium salts. These secondary salts would rapidly encrust the heating chambers of the evaporators with a rock-hard coating, thereby drastically reducing the plant’s performance. For this reason, the secondary salts are removed by precipitation, i.e. the unprocessed brine is softened. This takes place in two phases with the addition of quick lime, soda and carbon dioxide. The main residues obtained from this process are gypsum and lime, which are compressed and pumped into decommissioned caverns. 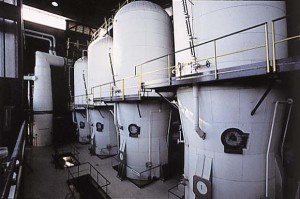 Hot steam at 140°C causes the brine to boil in the evaporator. The steam that is formed (now referred to as “flash steam”) is fed away from the top of the evaporator. The salt crystallises continuously and collects at the lower end of the evaporator as a wet paste.
Schweizerhalle Saltworks operates six evaporators. They are over 20 m tall and each of them has a volume of 100 cubic metres. The entire plant operates on the principle of mechanical steam compression. The flash steam is washed, fed into compressors where it is compressed, and then heated to 140°C again so that it can be re-used as heating steam. Thanks to this process, the heating energy required to produce salt nowadays is fifteen times less than in the past. 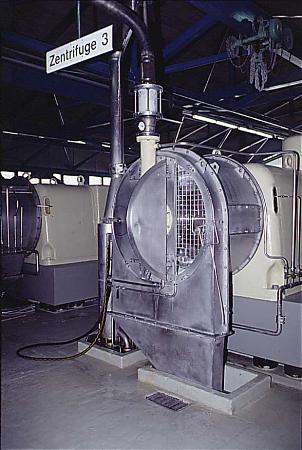 The wet salt paste is fed from the evaporators to the centrifuges. The paste is centrifuged at high speed so as to separate the water and the salt. 2% water is left in the salt as residual moisture. The salt now takes on a luminous white appearance for the first time and is as clean as fresh powder snow.
The fluidised bed dryer now performs another stage in the drying process; its hot airstream practically drives the last of the water out of the salt. Only a very few millilitres of water are left in 100 kg of salt. 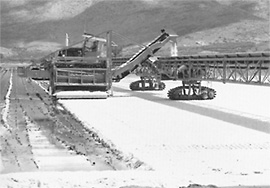 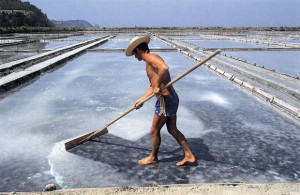 Obtaining salt by evaporating seawater in natural lagoons or artificially created ponds, saltmarshes or marine salt flats is one of the oldest processes. Saltmarshes were mainly created near to areas inhabited by ancient civilisations and on flat stretches of coastline. The principle has remained the same over the centuries. However, the system of evaporation and crystallisation ponds and the method of operating them has gradually been perfected.
The salt harvest used to be carried out laboriously by hand in the huge saltworks, but nowadays the work is performed by machines.

Obtaining rock salt by open-cast mining. Salar Grande, Chile.
Rock salt is the name for dry salt that is extracted from salt-bearing (saliniferous) rock layers with the help of mining methods. Most salt mines operate underground, but in salt deserts the rock salt is also mined on the surface (open-cast mining).
Rock salt (halite) is salt left behind by the primordial oceans millions of years ago when lagoons dried out. These layers of salt were covered by rock formations, so they are located underground or inside mountains. Salt is also found on the surface in desert regions. The historic salt mine of the Celts at Hallstatt dating from about 1000 B.C. has become famous.

Extracting rock salt from mines
Nowadays, the majority of the world’s salt is obtained from underground or open-cast mining. This is made possible thanks to modern mechanical mining technology.